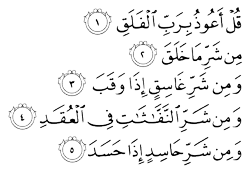 Suspicion can ruin relations between people, particularly when it is based on flimsy evidence, or hearsay. The Prophet (peace be upon him) spoke in very clear terms about misplaced suspicion, giving clear orders to refrain from it. The following authentic hadith groups together some of the actions that cause discord within the community and make people dislike one another:

Abu Hurayrah reports that the Prophet said: 'Beware of suspicion, for suspicion is the worst form of lying. Do not spy against one another, or compete with one another. Do not turn your back on one another, nor envy nor hate one another, but remain - you servants of God - brothers and sisters'. [Bukhari, Ahmad, Muslim]

This hadith stresses the importance of maintaining good relations within the Muslim community. The Prophet highlights certain things that would undermine such relations, and he tells us not to allow ourselves to indulge in them. Boycott, envy and hate should never be allowed to exist, let alone flourish in any Muslim community. Relations between Muslims should always be close. All members of the Muslim community should look at one another as brothers and sisters. They must value this tie of brotherhood, because it is established on the best basis, which is servitude to God and pure faith.

However, the hadith begins with a warning against suspicion describing it as the most untrue of speech. This is an apt description because whatever is said on the basis of suspicion has no basis in reality. It is all conjecture, leading to false accusations and ideas. It poisons relations and leads to discord and hostility. It also encourages what the Prophet mentions next, which is spying on one another. People do not spy on their neighbours or competitors unless they have some sort of suspicion they want to explore. Hence, they try to gather information secretly, perhaps through spying. This is again forbidden. The Prophet teaches us that we should help one another not to entertain any doubt leading to suspicion.

Yearning for Kaba arises only after understanding and the realisation that the House is truly the House of God, Great and Glorious is He, that it is modelled on the royal durbar so that he who goes there goes as a visitor to God, Great and Glorious is He, and that he who goes to the House in this world deserves that his visit should not be in vain. He will be accorded the object of his visit at the time appointed for him, namely the vision of God's Noble Countenance in the abode of eternity. For the inadequate mortal eye we possess in this earthly abode is unfitted to receive the vision of the Face of God, Great and Glorious is He, lacking the capacity to bear it or the equipment to take it in. But in the abode of the Hereafter, when it has been granted perpetuity and immunity to the causes of change and decay, it will be prepared for that vision and sight. Meanwhile, by betaking oneself to the House and beholding it, one earns the right to meet the Lord of the House in accordance with the noble promise.

To be sure, the yearning to meet with God, Great and Glorious is He, creates a longing for all that will lead to that meeting; for the lover craves everything in any way connected with his beloved. The House is connected with God, Great and Glorious is He, so this connection is surely enough in itself to make one yearn for it, quite apart from the wish to attain the abundant reward that is promised.