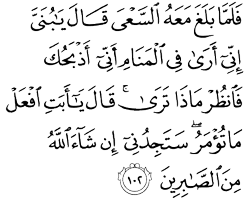 "And when he had reached the age of running with him, he said, 'My son, I see in a dream that I shall sacrifice thee; consider, what thinkest thou?' He said, 'My father, do as thou art bidden; thou shalt find me, God willing, one of the steadfast.'"

The Quran tells of the most extraordinary sacrifice that never was in minimalist and enigmatic terms. The Qur'anic account is as remarkable for what it does not say as for what it does. For instance, it does not say that God tells Abraham to sacrifice his son, or how much time elapses between his dream and the proposed sacrifice, where it is to take place, if Abraham ties his son, or if he ends up sacrificing a ram in his place in the end.

The Quranic Abraham may not know God's intent in testing him, but he does not face an ethical dilemma as does his Biblical counterpart because, while the Quran links the sacred and sacrifice, it does not link either one to secrecy. In the Quran, not only does Abraham tell his son of his dream but the son also has a role in interpreting it. Thus both father and son witness their absolute faith in front of one another. From a Quranic standpoint, had the father set out to kill an unsuspecting son, it would have robbed the son of all moral agency and made him into a victim of his father's tyranny while also making the father a murderer.

At a time when the law of the father sanctioned infanticide, it would not have been very extraordinary for God to have commanded Abraham to sacrifice his son, as in the Hebrew Bible. But, we know that God does not do this in the Quran and, instead, Abraham has a dream that he tells his son about. The dominant Muslim view is that this disclosure allows for a display of Abraham's authority as a father. I read the son's part in his sacrifice as doing just the opposite, that is, as illustrating the different ways in which the Quran challenges the legitimacy of patriarchal norms.

It does this, for instance, by not upholding paternal authority just because it is paternal authority; in fact, the Quran advocates disobeying parents if they 'strive/ To make thee join/ In worship with Me/ Things of which thou hast/ No knowledge' (3:14-15). It is true that Abraham was not pressing his son to worship anyone other than God, but my point is simply that the Quran's concept of moral personality is not premised on the notion of blind obedience to parents, particularly, to fathers. There is therefore no a priori reason to assume a son's investment in consenting to his father's authority.

It is not even the case that Abraham asks for his son's consent or obedience; rather, he asks his son what he makes of his dream. To this open ended question, the son replies that his father should do as he is bidden (by God). This shows both that the son takes the dream literally and that he believes he is obeying God's will; that is, he is submitting to the God of his father, not to his father. Indeed, it allows the son to profess his faith by assuming his own death. It is only by assuming his own death that the son can make his sacrifice a morally purposive and self-determining act rather than one of treachery or betrayal on his father's part.

The son's voice is important because it serves to curtail Abraham's rights as a father. By this I mean that not only does Abraham not have the right to commit infanticide, but whatever rights he does have in this instance are made subject to his son's moral choices. But, if Abraham's authority is not absolute in the matter of his son's sacrifice, can we view him as a patriarch and the sacrifice as an act of patriarchal violence, or as upholding the patriarchal status quo?

In the Quran God is not father and Muslims are forbidden from referring to God as such and even from using 'similitude' for God (16:74). As the Quran repeatedly says, God is uncreated (thus beyond sex/gender) and God is also incomparable and unrepresentable. The Quran's refusal to patriarchalize God means that Muslim fathers cannot rely on a model of divine fatherhood to legitimize their own authority. Not only that, but the Quran also roundly condemns people who ignored God's messages because they wanted to follow 'the ways of their fathers' (2:170), a phrase one can take to mean patriarchy proper or, more broadly, patriarchal tradition.

Abraham in the Quran did not possess a secret as a sign of his 'alliance' with God, nor is he a murderer, and nor does he try to impose his will on his son. All these should matter because they do matter. Like Abraham and his son, we are free to speak about the unspeakable since there is no burden of secrecy here, just the limitations of our own knowledge.

Compiled From:
"Abraham's Sacrifice in the Quran" - Asma Barlas

Shahr ibn Hawshab reports: 'I visited Aishah with my maternal uncle, and he said to her: "Any one of us may entertain thoughts which, if he would put in words, would ruin him in the Hereafter. If he were to act on them, he would be sentenced to death". She said Allahu akbar [i.e. God is supreme] three times, then she said: "The Prophet was asked about this and he answered: 'If this happens to anyone of you, let him say Allahu akbar three times. None but a true believer feels this way'."' [Bukhari]

Only a believer can judge his thoughts in the way expressed by the man putting the question. He knows that such thoughts could lead him to disbelieve or to committing a sin that earns capital punishment. Hence he tries to suppress these thoughts.

It should be clarified that such thoughts are not punishable in this life or on the Day of Judgement, as long as they remain within the realm of thought and whim. If they are not acted upon or stated verbally [should they relate to creeds and beliefs], then they are overlooked by God. Thoughts may vary in grade. Some are merely fleeting that leave no impression on a person's way of thinking, beliefs or actions. Others are stronger, or longer lasting, but they do not provoke any action. Others still get a person to make a decision, but when the chance offers itself to act on his thought, he refrains from doing so. Even though these grades differ, they all remain unpunishable. Even if the action is prevented by circumstance, no sin is recorded against the person concerned, because the sinful action has not materialised. This is part of God's grace, because if we were to be held accountable for our thoughts, along with our actions, we would be in a very difficult position on the Day of Judgement.

By contrast, when action is taken, then punishment for the sin intended or committed is incurred, even though the action did not achieve the end in mind. Suppose a man thought of killing another and lay in ambush. When the intended victim draws near, he aims his gun and shoots. Suppose that the target was not hit and the man not killed, yet the one who fired the gun incurs the punishment for his action, which is attempted murder. Fadlullah al-Jaylani gives the following example: Five people aim their guns at an intended victim: one hits him in his leg, injuring him, while another hits him in his head and the man dies. The third misses him altogether, while the fourth's gun is stuck and does not fire. The fifth had no bullet in his gun but he thought that it did. All five incur punishment, although the first two may have a greater punishment than the other three. But all of them are party to a murder.

One, fear of boredom and over-familiarity with the House, for this may tend to douse the ardour of reverence in the heart. That was why 'Umar, may God be pleased with him, used to beat the people who had completed their Pilgrimage, crying: 'Yemenis, back to Yemen! Syrians, back to Syria! 'Iraqis, back to 'Iraq!' For the same reason 'Umar, may God be pleased with him, was careful to prevent people from excessive circumambulation, saying: 'I am afraid people will get too familiar with this House.'

Two, nostalgia stimulates a yearning to return. God, Exalted is He, has made the House a concourse secure for mankind, i.e. a place where they should congregate, returning to it time and again and never ceasing to aspire to it. Someone said: 'That you should be in another town, with your heart yearning for Makka, attached to this House, is better for you than being there, bored with long residence and hankering after another town.'

Three, fear of committing errors and sins there. That is a grave peril, likely to excite the anger of God, Great and Glorious is He, on account of the nobility of the place. Ibn Masud, may God be pleased with him, said: 'In no city but Makka is a man chastised for his mere intention, before he has acted on it.' Then he recited the words of the Exalted One: 'Whoever purposes to violate it wrongfully, We shall make him taste a painful doom.' [al-Hajj, 22:25] That is to say, punishment is entailed by the mere purpose. It is said that evil deeds are compounded in Makka, as are good deeds. Ibn Abbas, may God be pleased with him, used to say: 'Monopolistic hoarding in Makka constitutes violation of the Sanctuary.'