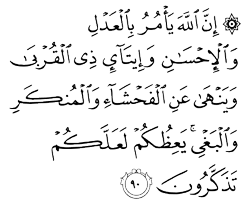 "God commands justice, the doing of good, and giving to [one's] relatives; and He forbids all that is shameful, and that runs counter to reason, in addition to aggression; He exhorts you so that you may bear this in mind."

This verse condenses the goals and fundamentals of the Islamic law. What God commands can be crystallized in these three concepts: the establishment of justice, going beyond justice and fairness to the best and most excellent, and the observation of these virtues in one's extended family so that they may be developed through the families to the society as a whole. Justice is comprehensive, and starts in the limited ranges of relations: among the family members, fellow workers, business partners, neighbours or local community; then it extends to various areas such as the social-economic, political, legal, judicial and international ones. One who is authoritative or dictatorial with his/her spouse or children cannot sincerely defend justice in the relations between the state and the people or between different countries in the world. Since the family is the nucleus of the society, justice, love and kindness should dominate the relations between its members, so that the family relations become a model for the whole society that should be followed and extended. On the opposite side, what runs counter to moral decency or reason is forbidden, as well as any aggression or injustice committed by any party against another.

These goals and fundamentals of Islamic law may be indicated and elaborated on in legal documents or juristic works for the benefit of practicing lawyers, but are stressed in the Quran to be read, recited and reflected on by all the believers. In this way, the Muslim masses, or a considerable part of them, will develop a legal taste about human rights and principles of justice that will evolve into a mass culture and a mature public opinion which is aware of the general direction that the legal system ought to maintain. It must also be pointed out that however central a position justice occupies in legality and morality, one is urged to go beyond it and do the best and most excellent by being kind, generous, forgiving, magnanimous, and working hard to reach perfection. In this way faith, morality and legality work together and support one another in developing the human individual and society. Rules of Shariah are meant to guard morality, but they only provide the basics which protect the security and interests of the whole society in a fair and balanced way, while individual morality has no limits in excellence, generosity, and altruism.

This hadith has several versions with different chains of transmission, all of which are authentic. This makes it highly authentic. One version which throws some light on its meaning mentions that a Makkan woman who was known to have a sense of humour and to love to play tricks travelled to Madinah where she was a guest of a woman of similar qualities. When Aishah heard of this, she said: 'My beloved husband always told the truth... [and she quoted this hadith]'.

What this hadith means is that God created souls and gave them their qualities. Those of similar qualities will easily be friends when they meet in this life, while those who have different natures are likely to be in conflict. This accounts for endless cases of people getting along together when their apparent circumstances should have kept them well apart. Moreover, it tells us something about what brings good people together and what allows evil ones to flock together and even trust each other when they know that they are evil at heart.

Sufism—the term given to Islam's immensely complex and infinitely diverse mystical tradition—is, as Reynold Nicholson long ago observed, fundamentally indefinable. Even the word Sufi provides little help in classifying this movement. The term tasawwuf, meaning "the state of being a Sufi," is without significance, referring as it probably does to the coarse wool garments, or suf, which the first Sufis wore as an emblem of their poverty and detachment from the world. Indeed, as a descriptive term, the word Sufi is practically interchangeable with the words darvish or faqir, meaning "mendicant" or "poor." Some have argued that Sufi is derived from the Arabic word safwe, meaning "elected," or suffa, meaning "purity," though both of these must be rejected on etymological grounds. Others have suggested that Sufi is a corruption of the Greek word sophia: "wisdom." This is also unlikely, though there is a tempting symbolic connection between the two words. For if sophia is to be understood in its Aristotelian sense as "knowledge of ultimate things," then it is very much related to the term Sufi, just not linguistically.

As a religious movement, Sufism is characterized by a medley of divergent philosophical and religious trends, as though it were an empty caldron into which have been poured the principles of Christian monasticism and Hindu asceticism, along with a sprinkling of Buddhist and Tantric thought, a touch of Islamic Gnosticism and Neoplatonism, and finally, a few elements of Shiism, Manichaeism, and Central Asian shamanism thrown in for good measure. Such a hodgepodge of influences may frustrate scholarly analysis, but it also indicates how Sufism may have formed in its earliest stages.