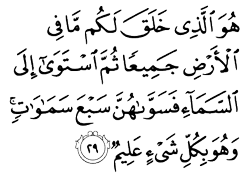 "It is He who has created for you all that is on earth, and has dealt with the heavens formed appropriately into seven, and He alone has full knowledge of everything."

Although the above verse is dealing with the creation of the whole universe and the multiple cosmic systems indicated as "heavens" be they within or beyond the human perception, it states significantly an essential general law: that God "has created for you all that is on earth". Consequently, as our jurists since early times rightfully inferred, everything on earth is pure and allowed to be used, unless it comes to be clearly forbidden by God.

Accordingly, everything is assumed allowed until the opposite may be proved specifically with regard to a certain thing, and the burden of evidence is on the one who claims prohibition, while the one who assumes the allowability is merely following the general principle and is in no need of any further support. It is against this Quranic and juristic logic for any person to ask for evidence from the or the precedents of early Muslims to prove that something was used or considered allowable in order to accept its lawfulness.

The same principle as the Quran emphasizes was applied in general in previous messages of God [3:93]. This comprehensive and fundamental rule secures the dynamism and continuation of the Islamic laws (Sharia), as it allows spacious room for considering the variables in different times and places. The general guidance in what may be allowed or forbidden in any given time and place is the natural properties of the matter and its effect on human merits and their development, whether physical or moral, individual or social.

Mother of the Faithful, Aisha, may God be pleased with her, said, "God's Messenger, may God be pleased with him and his family, said, 'Anything invented outside the scope of our religion, by anyone, is rejected.'" Reported by Al-Bukhari and Muslim. In a report by Muslim, the text of the hadith is given as, "Any deed outside the scope of our religion, performed by anyone, is rejected."

The saying of the Prophet, may God's peace and blessings be upon him, "rejected," means invalid and inadmissible and "outside the scope of our religion," means outside of sharia.

This hadith forms one of the great foundations of the religion. It is one of the inclusive hadiths of the Chosen One, may God's peace and blessings be upon him. It is clear in rejecting every heresy and every invention in religion. This hadith can be used to invalidate all forbidden and useless contracts. This hadith has also been used by some orthodox Muslims to show that invalidation requires corruption.

The other report, "Any deed outside the scope of our religion, performed by anyone, is rejected," is clear in invalidating every heresy regardless whether it is invented by an individual or others. Some dissenters, who practice heresy, might use the first report of the hadith to claim that they didn't invent the heresy. The second report is used to invalidate their actions regardless.

This hadith should be kept, disseminated, and used to invalidate wrongful deeds for it covers all those aspects. On the other hand, deriving branches from principles that do not go outside the boundary of sunna is not heresy.

The emotion that underlies our obsession with blaming and finding fault is anger. In our shame-and-blame culture, visible anger is everywhere. Political talk shows have become screaming matches. A short drive to the grocery store becomes an obstacle course of raging, finger-flipping drivers. Angry public outbursts directed at strangers and customer service people are becoming more commonplace.

Anger can be motivated by many different experiences and feelings — shame, humiliation, stress, anxiety fear and grief are several of the most common triggers. The relationship between shame and anger is about using blame and anger to protect us from the pain caused by shame.

Anger is not a "bad" emotion. In fact, feeling anger and appropriately expressing anger are vital to relationship building. Lashing out at others when we are in shame is not about "feeling anger." When we are doing this, we feel shame and mask it with anger. Furthermore, shame-motivated anger and blame are rarely pressed in a constructive way. Shame floods us with emotion and pain and the shame/blame/anger instinct is to pour it all over someone else. If one of our primary shame screens is anger and blame, it is essential that we understand and acknowledge this coping strategy. Next, we need to find out how, when we recognize that we are in shame, to calm down and stay mindful.