Essence of Worship, Continuous Remembrance, Responsibility of the Audience 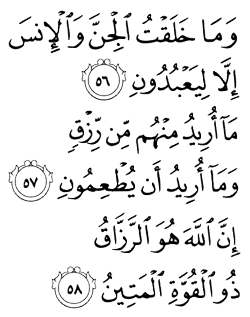 "I have only created the invisible beings [jinn] and the human beings so that they may [know and] worship Me. No sustenance do I ever want from them, nor do I want them to feed Me. Surely, God is the Provider of all sustenance, the One with all might, the Ever-invulnerable"

God has His purpose and plan behind creation, which we may understand as giving all creatures the chance to fulfill their potentials through following the natural laws of the Creator. For human beings, this means following God's guidance and the human mind.

Rational beings accept the existence of God by using their minds, and this is the intentional and voluntary statement made by the "homo sapiens" which represents the essence of worship, ibada: the acknowledgement of the true and absolute Divinity and Supreme "Lordship" of the One God, and the true and full "submission" of the human being. This realization and reckoning lead the human being to conform to God's message and plan for the fulfillment of all the human internal and external potential, while the All-mighty Lord Himself is in no need of being acknowledged or worshiped, since He is self-sufficient, infinite in His power and free of all needs.

God is the source and centre of all power and all goodness, and human progress depends upon our aligning ourselves with His will in all creation in this world's life and His guidance as represented in His messages. This is the meaning and purpose of worshipping Him. Any power which we seek must be from God, whose power is eternal, universal and beyond any bias. His care and grace are always sure, but they are applied together with His justice. His providence in this life reaches those who believe in Him and those who reject Him, the good-doers and the evil-doers. In the end, every human individual will be accountable for all that he/she has done with what God has granted him/her.

Continuous remembrance can replace supererogatory deeds, whether they be physical, monetary or both such as a supererogatory pilgrimage. This is clear from a hadith which Abu Hurayra transmitted. The poorest of the Emigrants [to Medina] came to the Messenger of God (peace be upon him) and said, 'O Messenger of God, the wealthy have taken the highest degrees and eternal happiness. They pray as we do and fast as we do, but they also have the advantage of wealth, which they use to go on the greater and the lesser pilgrimages and to combat.' The Messenger said, 'Shall I teach you something by which you can catch up with those who have surpassed you and surpass those who are behind you, something in which no one can better you, unless he does as you do?'

'By all means, Messenger!'

'You glorify, praise and magnify [God] after every Prayer,' he said.

It is agreed that this hadith is sound.

For them he replaced with remembrance the hajj, umra, and combat that they were unable to do and told them they could surpass all these through remembrance. The wealthy heard about it, and began the practice in their turn, adding it to the charity and devotional practices [they could perform] with their wealth, thereby achieving two sorts of excellence. The Emigrants who vied with them told the Messenger of God that they now shared this [practice] with them and so had [again] been set apart by something they, the poor, could not do.

'That is the grace of God,' the Prophet replied. 'He gives it to whomever He wills.'

Responsibility of the Audience

Communication requires at least two participants. Effective communication can take place only when all parties do their part correctly. In public speaking, the greatest burden rests on the speaker's shoulders to keep the audience interested and attentive. However, the audience also has the following responsibilities toward the speaker:

1. To be attentive and listen. If the audience is not listening then what is the point of speaking?

2. To be quiet. The Prophet Muhammad discouraged Muslims from talking during the sermon to the extent that he considered it a reason for nullifying the Jumuah prayer. Not even exchanging greetings is allowed.

4. To be neat. The Prophet told the Muslims to take a bath, dress well, and use perfume before going to the Jumuah.