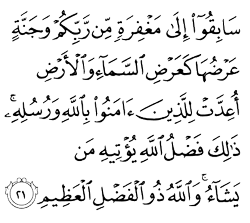 "Vie with one another, hastening to forgiveness from your Lord, and a garden as vast as the heavens and earth, which has been readied for those who have attained to faith in God and the conveyors of His message. That is the bounty of God, which He grants on whomever He wills; and God is of bounty abounding."

Individual competitiveness is human, and the Quran legitimizes it but directs it towards good deeds that are for the benefit of the individual and the society. Islam strikes the balance between social solidarity and cooperation on one side and legitimate individual competitiveness on the other. As the goal of human competition becomes the eternal paradise in the life to come, the pleasures of this world which persuade human greed and selfishness and accordingly human conflict and rivalry are replaced by common goals and benefits that strengthen solidarity and morality.

Those who have attained to faith become competitive in serving the common cause and the society, and individual accomplishments and would benefit the whole society. It is significant that what is categorized in the Islamic jurisprudence as the "right of God" distinctively from the "right of the person" represents often a collective right that reverts to the whole society.

Insult and slander may not be used even as a means of preventing wickedness. A person who attempts to prevent something munkar (evil) is only permitted to use, necessary, harsh words which are free of lies, insults, and abuse. It is only permitted to use words such as 'ignorant' (jahil), 'foolish' (ahmaq), or 'transgressor' (fasiq) for it is understood that every sinner tends to partake of these attributes.

The question may arise as to whether it is allowable to curse or insult a person, whether Muslim or non-Muslim, who is in fact notorious for criminal and evil behaviour. Moreover, might it not be permissible to curse and abuse sinners and profligates non-specifically i.e. in general, for their corruption? The answer to both of these queries is in the negative, precisely because insulting such persons may lead to reciprocal abuse. Similarly, according to a Hadith reported by both al-Bukhari and Muslim, the Prophet (peace be upon him) said: "One of the major sins a man can commit is to insult his parents." [This statement evoked a question from] the Companions [Who] asked, "Messenger of God! Does a man ever insult his own parents?" The Prophet replied "[Yes] when he insults another man's father or mother and this is reciprocated in turn."

The essential aspect of the Quranic teaching is to awaken in the human being the higher consciousness of his manifest relationship with God. According to the Quran, the affirmation of spirit does not come by the renunciation of the external forces but by proper adjustment of man's relation to these forces in view of the light of the world received from within. Thus the spiritual animates and sustains the material. The Quran demands the affirmation of the spiritual self in man with a recognition of his contact with the world of matter, and it points the way to master it, with a view to discovering a basis for a realistic regulation of life.

The Quran directs two ways of establishing connection with the reality that confronts human beings: one is the direct association with reality as it reveals itself within a person, that is, the inner experience; the other is the indirect reflective observation and utilisation of natural phenomena as they reveal themselves to perception. The Quran regards both Anfus (self) and Afaq (world) as sources of knowledge. Allah reveals these signs in inner, as well as outer, experience and it is the duty of human beings to judge the knowledge-yielding capacity of all aspects of experience. Thus there are three main sources of human knowledge referred to in the Quran, namely inner perception, environment (signs of Allah) and History (the days of Allah).